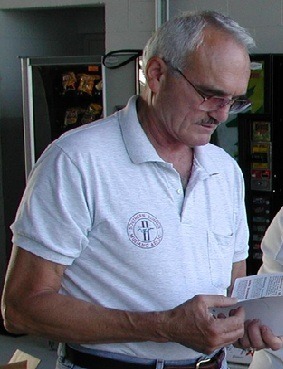 Marvin Hilyard joined the SIMA in 1998 and right away placed his beautiful 1968 Lime Gold V-8 Coupe in the Roberts Ford Show Room at our 21st Annual Mustang Round-up Car Show and Swap Meet. Marvin was born on the family farm, North of Bunker Hill, IL on December 16, 1935. He graduated from BHHS in 1954. He served his Country in the U.S. Marine Corps from 1954 to 1957. He retired from Olin Corp. at East Alton.

His interests besides Mustangs were his family of cats, Scooter, Kit Kat, Annie, Porky, Sugar, and the two Girls (as he called them). Marvin was a generous and "Real" person. He was private, but at the same time a friendly and warm person. Marvin attended the Springfield, IL Grand National Show this year, and was very proud of the First Place award he received. Marvin passed away on December 15, 2004. 15 Mustang vehicles helped form the procession from the funeral home to the Wood Family Cemetery, Marvin's final resting place.

Marvin received a "Service Award" plaque at the 2003 annual SIMA meeting. Marvin always had a smile and a "good word" for all he came in contact with. Marvin was a good friend to our Mustang family and is greatly missed.